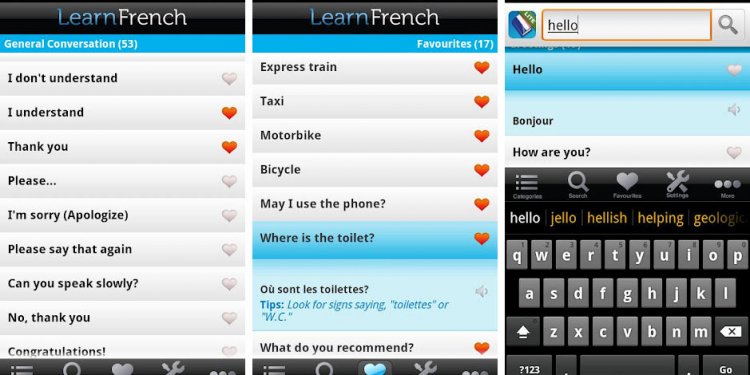 From our earliest moments in this world we begin to communicate. At first nothing more intelligible than loud screaming and crying, but communicating nonetheless. It is through our growth and learning that we begin to learn how to utter words, use body language and speak without speaking.

Learning a new language is one of those things that just about everyone in this world sets out to do at one time or another, but is one task that has proven to be a lot more difficult as we get older. However, as we have gotten older technology has improved, up until the point where it is now possible for us to start learning a new language without having to go to school! This has all been made possible by the almighty smartphone.

In this blog I will take you through the top 5 language learning apps for Android so that you too can learn a new language in a fun, relaxed way, at your own pace, in your own time.

Get talking in another language right here, right now!

At the very top of this list is an app that is dedicated to learning a language that is spoken by around 14.4 percent of the world’s population, Mandarin Chinese. "Learn Chinese" is a Chinese Language (Mandarin) app inspired by Duolingo (the next app on this list) that immerses students in a game-based learning experience that teaches pinyin (the Romanization of Chinese), vocabulary, pronunciation, grammar and handwriting. The simple nature of this app makes it really fun and easy to start learning Mandarin, arguably one of the most challenging languages in the world. Start learning Chinese here!

Next up we have Duolingo. This app has been around for quite some time, and its fun, easy to use platform is a testament to its staying power. Language learners can choose to learn languages such as English, Spanish, French, German, Italian and Portuguese to name but a few. It's free with no ads and really promises to be an app you can count on for your language learning needs Become multilingual with Duolingo!

Mango Languages gives users access to over 60 foreign-language courses and 17 English courses taught in the native language of the user. Mango strives to teach language students the four key conversational components for successful communication, which according to the app is vocabulary, pronounciation, grammar and culture. As a language learner myself, I have to say that the culture of any given region is deeply embedded in any language, so learning more about that definitely helps you to understand the language and people better and the subtle nuances that each one presents. Download Mango Languages from the Play Store here!

Learn 50 languages is an app that is available in over 50 languages and in approximately 2500 language combinations, e.g. German to English, English to Spanish, Spanish to Chinese etc. Users are presented with situational lessons such as at a restaurant, getting to know people, small talk and so on. This app does exactly what its namesake advertises, and is a great app to help you start learning a new language today. Get talking in 50 different languages here!

Anyone that has ever owned a PC and tried learning a new language before has surely come across the app known as Rosetta Stone. This now mobile app was made popular on PC, and you'll be glad to know that you can expect more of the same stuff that made it so memorable on your smartphone. Users can learn to speak a wide variety of languages such as Italian, German, French, English, or one of 19 other languages anytime, anywhere. Get started with Rosetta Stone here!

There you go, that's it for the top 5 language learning apps for Android! Hope they can help you on your road to conquering a new language in the near future. Goodbye, totsiens, 再见！

Click below to discover AMGOO's complete range of unlocked Android smartphones supported in various languages, ready to use wherever you are!