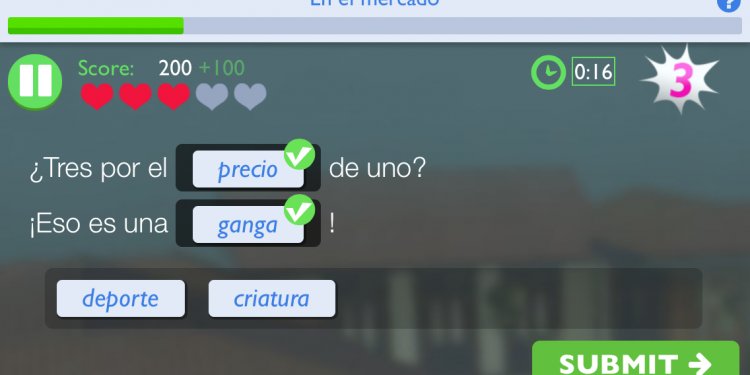 You either love it and obsess over it, or you hate it with a fiery passion.

But it doesn’t have to be the latter!

As a teacher, you have the power to convert your grammar-detesting students into grammar lovers by showing them that learning doesn’t have to be grueling.

And not just any games, but grammar games!

Grammar can be fun. It’s true. Would I lead you astray?

Actually, I may just be the perfect person to lead you through this topic. I love proper grammar and I’m constantly correcting the people around me.

Incorporate some of the games below into your Spanish class, and you’ll see just how effective games are at getting students this passionate about learning Spanish.

Some of the best activities for language practice are the ones that utilize multiple aspects of learning.

That is to say, they involve, listening and reading, or all of the above.

The sentence matching grammar game is one that’ll get your students practicing reading, writing and speaking.

The first step in this activity is to type and print out sentences in Spanish. These sentences should all use the grammar points you’re currently teaching. For example, if you’re teaching preferito versus imperfecto, you could use the sentences cuando era nino, él bailaba todos los días and el sábado pasado, yo fui al supermercado. Make sure the font is large enough to read.

Once you print out several sets of sentences, cut each sentence in half. When teaching verb tenses, have the subject on one half and the conjugated verb on the other.

In class, break the students into groups. Give one set of sentences to each group. Next, have the students match the scrambled sentence halves up. Once the students think they have a match, ask them to write it down on a blank sheet of paper.

To motivate your students further, you can turn the game into a little competition by having the groups race to see who can finish first. If you choose to make this a contest, you can write the group numbers on the board and then write their finishing places under their numbers.

Students tend to love activities that involve their favorite characters from television, movies, games and cartoons.

The first step in playing comparison cards is to make many playing cards (ones that resemble Pokémon or Magic cards, if you’re familiar with those). These cards should have pictures of famous cartoon characters and statistics about the characters.

For example, you can make a playing card featuring Belle from “Beauty and the Beast” which shows her age, height, interests, etc.

Make as many cards as you have time for in class. I’ve found while playing this game that the more you make, the more enjoyable the activity becomes. In addition to the cards featuring characters and their statistics, print out a number of adjectives in large font and cut them into individual cards.

At the end of the activity, ask each group to choose their favorite sentence and share it with the rest of the class.

If you’ve never played the classic game “twenty questions, ” you’re really missing out. Give the guessing game a little twist by putting a Spanish spin on it in class.

In pairs or groups, ask students to ask each other twenty yes-or-no questions until they can guess what the other students have in mind.

For example, they can ask questions like: “¿Es una fruta?” or “¿Es un animal?”

This is perfect for teaching and reinforcing Spanish gender rules.

Your students can build on each question as they attain more information about what their classmates are thinking. So if a student answers “sí” to “¿es un animal?” the questioning student can then ask “¿es un animal pequeño?”

Before starting the activity, give your students examples like the one above to understand how it works.

Well, it may not be the same without Alex Trebec as the host, but trust me, Spanish Jeopardy never fails to provide a great time in class. One of the best aspects of Spanish Jeopardy is that you can use it as a tool for basically any lesson you’re currently teaching in Spanish.

Create a Jeopardy game board with categories related to different parts of Spanish grammar. Split your class into teams and have them choose categories and points. One category could be “¿masculino o feminino?”

If a student chooses this category, they’ll have to determine if a word is masculine or feminine. For higher points, the words should get more and more difficult, like the word “problema.”

Depending on how much time you have, you could have the winners proceed to another round.

What are you doing?

Charades, the amusing and occasionally embarrassing acting game many of us played as kids, is yet another activity just itching to get a Spanish makeover.

To prepare for the activity, print out a list of actions, cut them up and place them in a bag. When a student volunteers to demonstrate an action, have him or her draw a sentence from the bag. Have the students take turns guessing what the student is acting out. This is ideal for practicing gerunds.

To keep things interesting for your students, make the game into a competition. For example, students who guess the action correctly can get two points and the ones who volunteer can get one. Giving students incentive to volunteer may convince the shyer ones to gain the courage to get in front of their peers.

Who’s the fastest in your class? Who has the longest hair? Who’s the tallest? Who can jump the highest? Who can do the best dance solo on the spot?

Time to find out by playing Spanish Superlative Olympics!